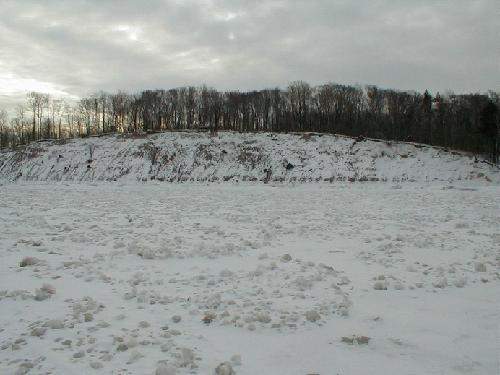 The ice began to build up along the shore early in January. Soon a thin edging of solid white fringed the beach. Then four or five cold nights and rough days, and within a week the fringe had become a belt of jumbled slabs and lumps of ice perhaps fifty feet wide. I went up to look at it on a cold winter morning around mid January. The wind had stirred up the lake but as the 3 foot waves entered the area of slush and bits of ice near shore, they quickly died away. No crash of surf sounded that day- rather a ghostly whispering and swishing as bits of ice rubbed together near shore. It seemed like the distant murmur of long vanished memories.

Then a week later even that was gone. All there was to see on January 25 was a vast field of white, stretching away to the horizon. It had frozen solid, extending at least ten miles out and presenting an arctic scene. Of course it invited exploration so two ice walkers went down to check it out. A trail of fox tracks stitched over the ice ahead of me and as we stumbled over the surface studded with gray and white lumps of ice the field stretched away white and flat forever. I ventured out perhaps an 500 yards  before my courage failed. Odd  how we think nothing of venturing miles offshore on a summer day with a boat, yet walking on water a half mile on a 15 degree day in January intimidates some of us? As a pedestrian there is entirely too much space out there. This alien landscape didn't really feel dangerous, but at the same time, it was an absolute sort of place, not much you could do if you did find a hole and fall in. Is this how non swimmers feel when they go out on a boat for the first time?

It wasn't real pleasant walking either as the bits of slush from a couple weeks ago had frozen in to form numerous rounded ice balls under foot. It would have been easy to twist an ankle out there.

A check of the internet back on shore that afternoon link here showed that Lake Ontario's ice cover had built out as far as the Gallo and Main Duck islands. Will it freeze over this year? I wonder when it last did?