Back in October I did a brief update that needs follow up on type E botulism and dying birds and fish. Since that update I've learned several things. First- I've heard via the news feed my spouse put out, that the Main Duck wind farm has been put on hold for a year by the government. More study on impacts required.

Since the discovery of dead loons by Fair Haven's channel I and others have found many many more dead birds. 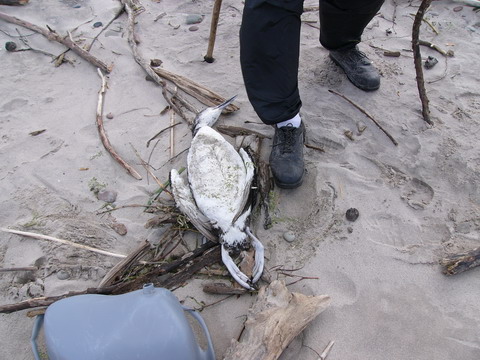 Dead loons appeared on beaches from west of Rochester to the east end of the lake. The botulism outbreak coincided with a southward movement of migrating loons and it hit them hard. A news report stated that 343 loons were picked up non a two mile stretch of shore near Rochester. This was one of if not the biggest bird kills on Lake Ontario if not the entire state ever recorded. Lake Erie may have also experienced a 'record “ for bird mortalities this year. As yet I've seen no estimate of the total numbers but certainly thousands of loons died. This is particularly tragic as the loon has been under stress from toxins and human development and activity in much of its New York/Great Lakes environment. We were thrilled to see two breeding pairs on Main Duck a few summers ago. This June when we stopped in we saw only one loon there...

The same botulism outbreak claimed other fish eaters as well. Roland Micklem and I made a melancoly survey of Sodus Point's beach on a cold windswept afternoon and found a deteriorated grebe of some sort, and a merganser. Old Squaw ducks and other fish eaters have also been reported. The news story citing the 343 loons picked up off Rochester states that visitors to the bird rookery on Little Galloo saw the outbreak coming last summer. Botulism outbreaks do occur in the summer but they seem to be most severe in the fall ( during the migration season unfortunately). Last July while outbound on a sailing charter I noted a dying tern in the Fair Haven channel with the characteristic “limberneck” of an affected bird. Two hours later the bird was still there but now dead.

Type E botulism is one strain of a common bacteria that thrives in an aerobic environment (like your low acid beans in canning jars).It produces a powerful neurotoxin that paralyzes the victims hence name limberneck for the affected birds' condition. Birds before dying loose all muscle control and sit on the water with heads flopped to one side. Type E botulism is new to this region. I've seen one suggestion in print that the strain may have been introduced to the Great Lakes in ballast water.

The precise factors that cause an “outbreak” of the toxin are not yet full understood. As mentioned above it does occur in the summer but seems most widespread in the fall. The link between bacteria, zebra mussels (which create an anaerobic environment for the bacteria by growing in dense beds and producing large amounts of nutrient rich waste) and birds is the round goby. This is a small fish that arrived in Lake Ontario via ballast water a few years ago. It's native to the same region as the zebra mussels and feeds on them. As it does so, it concentrates the toxins and when birds eat enough gobies they in turn are affected.

A quick survey of the Internet didn't turn up much in the way of ecological impacts of these massive die offs, but tens of thousands of fish eaters like the loons are known to have perished. Along with all the other stresses on their environment such as breeding habitat degradation and residential development and increased traffic at their wintering areas in Florida the overall impact has to be not good. Ward Stone the wildlife pathologist who helped alert the scientific community with his unpopular and unwelcome message of the toxic chemicals problem years ago after a Mohawk midwife spoke to him about health issues and polluted snappers at the St. Lawrence reservation, has called this a “tipping point” for the lakes. Canaries in coal mines, loons dead on beaches. Things keep changing out there.