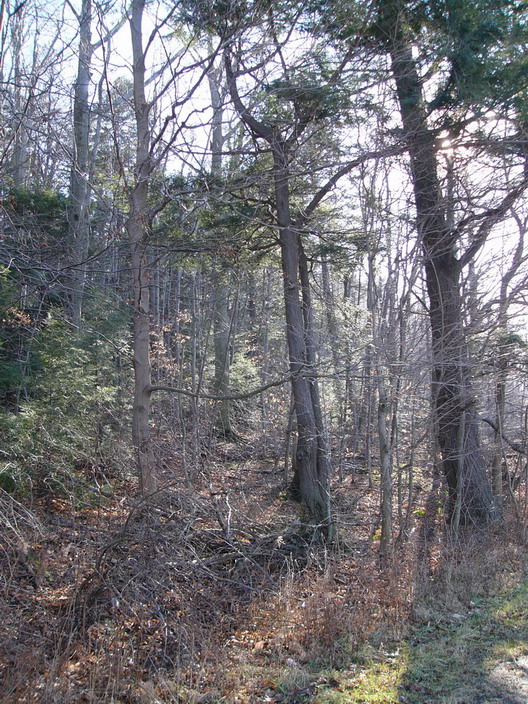 This photo and the one below were taken standing on the lake shore at end of Dutch St,about half a mile west of Port Bay. I was facing east for this one. I turned around and faced west for the one below.

It's not just the beach that's being impacted by human construction. The quality and quantity of Lake Ontario's forests, like those of Lake's Erie and Michigan, are also in decline. And that has a number of effects on its ecosystem.

The Northeast Midwest Institute, a think tank devoted to policy analysis in the great Lakes region, reported in 2005 that “forest management and conservation should be a major component of Great Lakes ecosystem restoration.” This same priority was acknowledged in the 1990 Great Lakes Fish and Wildlife Restoration Act's listing of priorities.

To the casual eye it would seem that we have plenty of trees remaining along the lake's south shore. But patches of trees do not make a forest, at least not in the ecological sense. A forest is more than simply a collection of trees.

In the Lake Ontario watershed, forests were once the dominant land cover, extending unbroken for many thousands of acres. The various plants and animals and soil organisms within the extensive forest evolved together for many centuries. Then in the 19th century much of the watershed was cleared for agriculture with small areas of mature trees left for farm woodlots. By the 1920s farm fields were being abandoned and allowed to revert back into trees. Some of these second growth forests were a good approximation of the original land cover though they did differ from the original virgin stands of trees. A number of tree species such as the white pine and American chestnut were no longer part of the mix. Still, these second growth mixed forests gradually aged and assumed many of the characteristics of the original stands of trees. But in more recent times, that second growth forest has come under increasing stress and fragmentation.

As demand for hardwood for domestic use and export to China has risen, so, too, has local timber harvest. Much of that harvest along the lake shore is conducted on small privately owned wood lots and is rarely done with any sort of sustainable harvest objective in mind. Many of the land owners simply want to make a bit of money. Poor logging practices and grading techniques such as selecting the high quality trees and leaving behind those of poorer quality are now causing declines in the health of our local forests. So has clear cutting and increased fragmentation ( the breaking up of a large wooded area into a series of smaller stands separated by non forested land). A forest that is broken up by clear cuts or lots for houses cannot regenerate into a diverse healthy stand of mixed hardwoods if the parent sources of seed are lacking or if the soil is depleted of nutrients.

Unbroken forest cover is also important to a number of woodland bird species that require large blocks of forest to survive. A publication put out by the Cornell ornithology lab's Project Tanager, says that distances of at least 330 feet from a forest edge are needed by these so called area sensitive forest birds like the wood thrush and scarlet tanager to reduce nest predation and the impacts of the parasitic cowbird. Nest predators such as the blue jay and the cow bird thrive in broken suburban types of land cover. But the native forest birds need large wooded areas of at least 70% forest cover within a 2500 acre surrounding block. Deforestation in both the wintering areas for these birds and in their summer breeding areas here has caused sharp declines in a number of species. Populations of the wood thrush, whose hauntingly beautiful call has long echoed through my wooded back yard has been declining 2% a year. Another less conspicuous forest bird the cerulean warbler is thought to be declining at a rate of over 3% a year throughout the Northeast.

Lake shore forests have high value to woodland birds for several reasons. Shoreline forests share some of the same characteristics as riparian forests which are known to be important to breeding birds. These areas have a high abundance of aquatic midges during periods of mass emergences in the summer bird breeding season. Where creeks enter the lake, they provide a typical riparian habitat rich in food plants and cover. Lake shore forests are also important to large raptors like the bald eagle and osprey which favor the shoreline for resting and feeding.

During spring migrations, the forested shoreline has special value as a staging area for both migrant song birds and for many traveling soaring birds and raptors. Migration is a long and hazardous journey. One study of one small song bird, the black throated blue warbler, found that 85 % of the population's total annual mortality occurred during migration. And migration over water is particularly hazardous for these little travelers. I vividly remember being at sea once, about ten miles off Maine aboard a fisheries vessel in late October during a stormy night when hundreds of small birds came swirling out of the night to settle on our flood lit decks. Our ship was alive with juncos, chickadees, fall warblers, and other small travelers. Some flew on the next day, others ended up as little bits of fluff in passageways or corners of the trawl deck.

As my night of bird “sampling” at sea showed, traveling birds need places to rest and feed. Such stop overs are just as important as summer or winter habitat to the survival of migrant birds. Several studies by the Nature Conservancy and others using radar, field counts and other observations, have identified the area within a half mile of Lake Ontario as one of these areas of particular importance to birds as a stop over site. Here many species of migrating birds rest and feed in brush and forest before moving on either to cross the lake's open waters or to fly along its shore. When faced with bad weather and head winds, they particularly “stack up” along the lake shore before moving on.

Some of the songbirds like the warblers and other insect eating migrants, like the various swallows, arrive just as the first of a series of massive spring aquatic midge hatches occur along the lake shore. One can then often observe various small birds feeding heavily in brushy and forested areas on this lake generated bounty. An article in the January 2007 issue of The Auk, a journal of ornithology, documents weight gains of up to nearly 10 % for twenty different species of birds tested during stop overs near Braddocks Bay as they made their spring migrations across the lake.

A number of other birds including chickadees, blue jays, robins, and saw whet owls move along the shoreline following the lake coast northward. And soaring birds that avoid the cold stable air over the lake also follow the shoreline. These large birds are easily observed and counted at places like Derby Hill at the southeast corner of the lake where over 60,000 hawks sometimes pass in one day. Some, though not all of the raptors, also favor shoreline forests and hedgerows for resting and feeding. At my own lake shore office, I've counted dozens of turkey vultures passing over within a 20 minute period while I gaze out the window between paragraphs.

Unfortunately Lake Ontario's shoreline forests in both the US and Canada are rapidly giving way to urban sprawl. Stretches of shoreline that consisted of farm fields or orchards 10 or 15 years ago now support ever increasing numbers of waterfront “Macmansions. Last summer on a cruise with Sara B to Oak Orchard, I was amazed at how much the waterfront had built up west of Rochester since my last trip by boat along that area in 1987. And a study of land use in the Toronto area found that amount of developed land per person tripled from the 1960s to 2000. One has only to drop anchor in Prinyer's Cove to see a prime example of the impact of residential resort development on the shoreline. 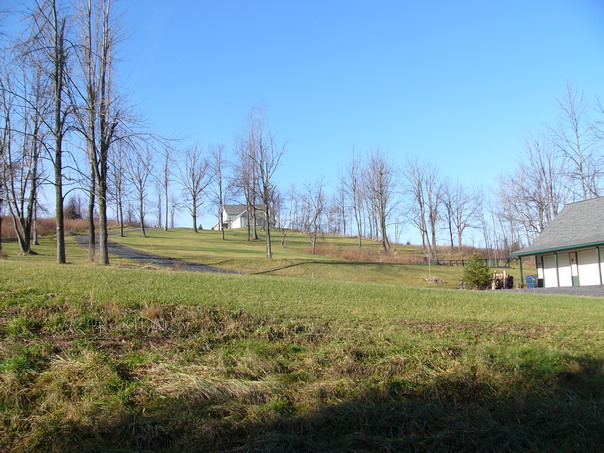 At the west end of the lake, studies show that from 1996 and 2001 more than 90% of Ontario Province’s population growth took place in this region making it the third fastest growing area in North America and one of the top 10 most sprawling regions in the world. Sprawl has also been documented on the US shore. In Buffalo where there has been virtually no overall population increase showed a 52% increase in urbanized areas between 1982 and 1996. Rochester's population declined 3.1% however growth of urbanized area increased 15.5% during the same period.

A variety of social and economic factors are encouraging low density development on both sides of the lake and anything with a view of the water is a prime candidate now for a new house. Recently NY State's DEC decided to perform “salvage logging” along the lake shore in a number of wildlife management areas. Some of the logging consisted of clear cuts. In an effort to obtain a moratorium on the state's action I did an Internet search for lake shore forest cover changes in an effort to refute the biologist's assertion that we had plenty of forested lands in the area and that what we really needed was more early succession habitat ( that is old fields and brush).

Surprisingly, I could find little comprehensive data on the extent of forest fragmentation and destruction by sprawl in the Great Lakes watershed though I did turn up a couple of proposals to use satellite data to study recent changes in land use. I did however, find plenty of statements about the bad effect of sprawl on the environment and its importance within the region.

Deforestation and development impact the environment in a number of ways. Runoff increases and with it pollution of nearby waters. The patterns of runoff also change, with more extreme and more rapid fluctuations of water level in lake tributaries. And habitat for a variety of resident native animals and birds is destroyed along with the valuable staging areas for migrants. A number of small native forest animals like the various salamanders and some of the frog and toad species are already under particular stress. Logging that damages soil structure, strips forest litter, and removes old wood on the forest floor along with residential home construction lead to long term declines in their habitat quality.